Triple Crown is, to my knowledge, the only triple heroic crown of sonnets in the English language. I believe it is the only such poetic work in any language. Therefore, some words of introduction are certainly appropriate, probably helpful, and possibly necessary.1

A heroic crown of sonnets is a sonnet crown consisting of fourteen poems linked as described above. The added feature which makes the heroic crown more than simply a longer collection of poems is that the linking (repeated) lines of poetry themselves comprise another sonnet. Thus, a fifteenth sonnet is implicit in the fourteen sonnets explicitly stated in the heroic crown. This fifteenth sonnet is called the magistral sonnet. As an added feature, the magistral sonnet is often an acrostic, with the acronym embedded within it pithily summarizing the theme of the entire set.

One can represent a heroic crown of sonnets, then, as a series of small filled circles linked together by a larger circle, something like beads on a necklace. It will be readily apparent that one could have three such circles, with each circle intersecting the other two at two places. One of the sites of intersection is common to all three circles. (See figure below.) Each cycle of poetry, therefore, will contain three poems whose first lines also serve as first lines in poems of the other two cycles. This is the fundamental structure of Triple Crown. 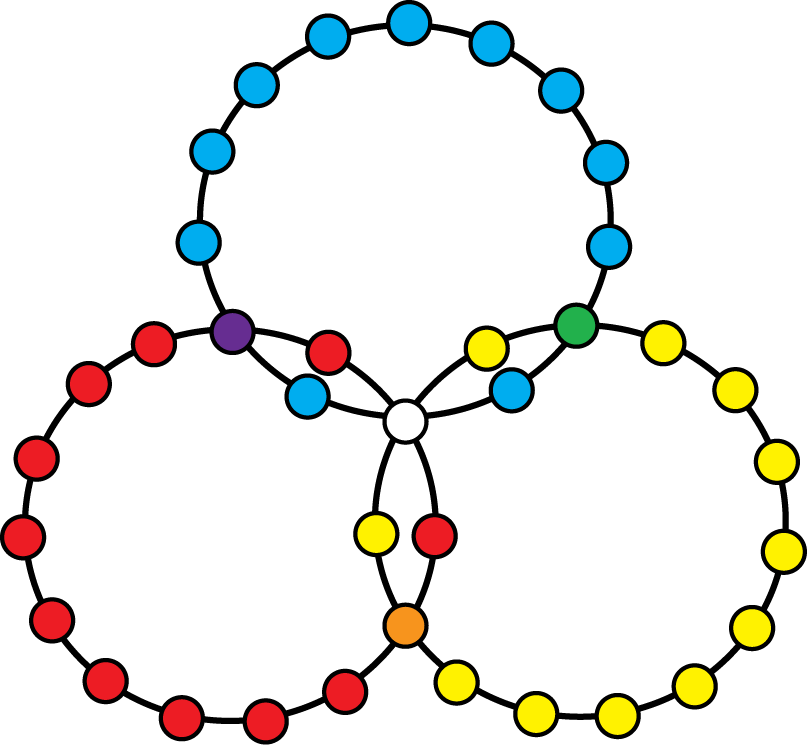 Triple Crown contains several other structural features. Naturally, the magistral sonnet of each cycle still serves as an acrostic. Additionally, the eighth line of each of the poems (excluding the magistral sonnets) also form an acrostic spanning the entire poetic work. In the text, the first letter of these lines is in bold font.

Blue is the color ascribed to heaven and all that emanates from it. The magistral sonnet of the blue cycle is a recapitulation of the story of Creation, just as the poems within that cycle tell the story in greater detail. Every poem of the blue cycle, except as noted below, refers to some blue aspect of Creation.

Red represents conflict. The red cycle tells the stories of conflict in the lives of the three great kings of Israel―Saul, David, and Solomon. The magistral sonnet of that collection retells the story found in Song of Songs; that great poem, too, tells of the conflict―love, estrangement, and reconciliation―of God and the Jewish people. The poems of the red cycle, again with the exception noted below, reveal the redness of their subject.

Yellow is the color of dust, decline, and decay. The magistral sonnet of the yellow cycle summarizes the story of Job, and the poems of that cycle tell Job's story in greater detail. These poems, like those of the other two cycles, reflect their thematic color, except as noted below.

Creation is known from afar. The blue cycle portraying Creation is therefore written primarily in the third person. Conflict is dyadic. The red cycle, therefore, is excerpts of dialogue, written primarily in the second person. Suffering is personal. The yellow cycle is written in the first person. There are, of course, many more structural and thematic features in Triple Crown. I leave it to the reader to find or invent these, and to enjoy them.

Above each poem in the book is a diagram indicating where, in the total structure, the poem lies. This should help keep the reader apprised as to his location within the entire work.

Triple Crown is not a collection of poems. It is a unified work. It is intended to be read in the order presented. It merits re-reading.2

1: The adverbs here decrease in intensity as the adjectives increase in intensity. A similar pattern is seen in Psalms 1:1. "The praises of Man are that he walked not in the counsel of the wicked, and stood not in the path of the sinful, and sat not in the session of scorners." Walking by gives less exposure than standing, and standing gives less exposure than sitting. The wicked are worse than the sinful, and the sinful are worse than the scorners.

2: See author's introduction to The Path of the Just (Mesillat Yesharim), by Rabbi Moshe Chayim Luzzatto.